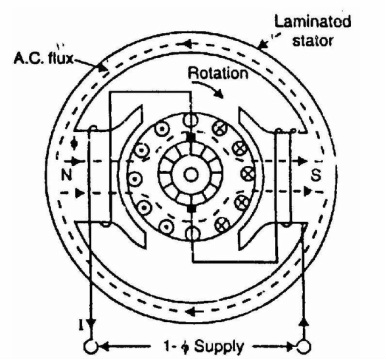 A d.c. series motor will rotate in the same direction regardless of the polarity of

the supply. One can expect that a d.c. series motor would also operate on a single-phase supply. It is then called an a.c. series motor. However, some changes must be made in a d.c. motor that is to operate satisfactorily on a.c. supply. The changes effected are:

(i) The entire magnetic circuit is laminated in order to reduce the eddy current loss. Hence an a.c. series motor requires a more expensive construction than a d.c. series motor.

reactance of the field winding to a minimum. This reduces the voltage drop

across the field winding.

(iii) A high field flux is obtained by using a low-reluctance magnetic circuit.

(iv) There is considerable sparking between the brushes and the commutator

when the motor is used on a.c. supply. It is because the alternating flux establishes high currents in the coils short-circuited by the brushes. When the short-circuited coils break contact from the commutator, excessive sparking is produced. This can be eliminated by using high-resistance leads to connect the coils to the commutator segments.

except that above modifications are incorporated [See Fig. (9.20)]. Such a

motor can be operated either on a.c. or d.c. supply and the resulting torque-speed curve is about the same in each case. For this reason, it is sometimes called a universal motor.

When the motor is connected to an a.c. supply, the same alternating current flows

through the field and armature windings. The field winding produces an alternating

flux f that reacts with the current flowing in the armature to produce a torque. Since both armature current and flux reverse simultaneously, the torque always acts in the same direction. It may be noted that no rotating flux is produced in this type of machines; the principle of operation is the same as that of a d.c. series motor.

The operating characteristics of an a.c. series motor are similar to those of a d.c.

(i) The speed increases to a high value with a decrease in load. In very small

series motors, the losses are usually large enough at no load that limit the

(iii) At full-load, the power factor is about 90%. However, at starting or when

carrying an overload, the power factor is lower.

§  (and corresponding small size) and

They can, therefore, be used to drive: